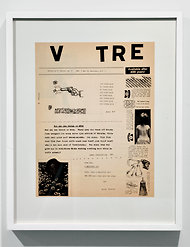 Decades before there was Occupy, there was the artist George Maciunas (1931-1978). Born in Lithuania, Maciunas (pronounced ma-CHEW-nas) came to New York City in the late 1940s and graduated from Cooper Union in 1952 with a multitasking degree in art, graphic design and architecture, later supplemented with work in art history and musicology.

All of these disciplines came together in the giant nebula of international collective activity known as Fluxus, which Maciunas both named and oversaw. And on the movement’s 50th anniversary, Cooper Union, in collaboration with the Jonas Mekas Visual Arts Center in Vilnius, Lithuania, is paying homage to Maciunas, its illustrious alumnus, with this engrossing archival show.

With roots in Dada and Zen Buddhism, Fluxus was anti-capitalist, anti-elitist, pro-community and pro-play. On the one hand, its goal was to propose a new kind of art in which anyone could participate, and to create an avant-garde so integrated into life as to become the new, enlightened normal. At the same time, Fluxus preserved and cherished its distanced, critical status, as exemplified in its sly, funny sendup of corporate culture and its socialistic innovations.

A practical-minded utopian, Maciunas bought several crumbling industrial buildings in 1966 in SoHo, a neighborhood slated for demolition in the name of urban renewal. He began converting them into live-and-work spaces to be owned and managed by artists, who, particularly if their output was unmarketably experimental, were otherwise hard-pressed to find quarters in the city. One of these Fluxhouses also held early showcases for underground films, run by Maciunas’s fellow Lithuanian, Jonas Mekas.

The Cooper Union exhibition, organized by Astrit Schmidt-Burkhardt, follows Maciunas from school, through his personality-crowded Fluxus years, to his death from cancer at 46. It requires a fair amount of close reading and decoding, but anyone who wants to get a sense of how art can be both activist and existentialist will find bracing information here.

And anyone who wants to get a sense of Maciunas himself, and the Fluxus universe in which he lived, will want to watch Mr. Mekas’s swiftly flowing 1992 film, “Zefiro Torna, or Scenes from the Life of George Maciunas.” It plays continuously in the gallery, and it’s exhilarating and heartbreaking.