3 Paintings of George Maciunas
from 1950’s 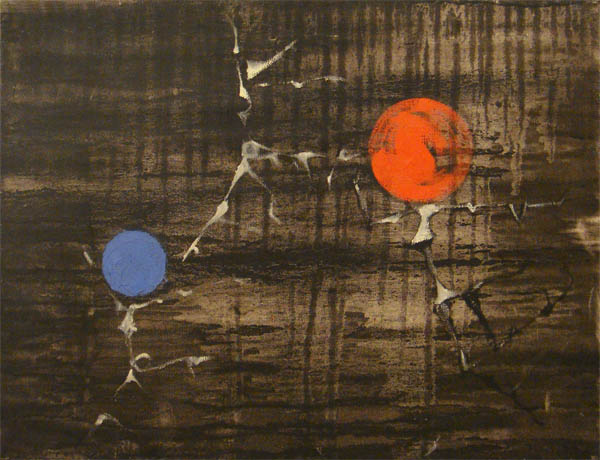 George Maciunas / Fluxus Foundation, Inc. is pleased to announce the exhibition 3 Paintings of George Maciunas from 1950’s and the conceptual web exhibition Knowlede As Art: Chance, Computability and Improving Education – Thomas Bayes, Alan Turing, George Maciunas, from March 9 – April 28, 2012. This exhibition, currently on view at the newly renovated Fluxus Foundation Gallery and Laboratory, offers a rare opportunity to view three of the nine Maciunas paintings which exist in the world. These works, painted while Maciunas was obtaining degrees in art, art history, graphic design, architecture, and musicology, lend insight into Maciunas’ development as an artist before the inaugural founding of Fluxus in 1961. Converged at the crossroads of art and politics, Fluxus was a collective of artists, composers, and designers bound by their intermedia sensibility and experimental enlightenment. Maciunas’ interdisciplinary education greatly contributed to his own works and the aesthetic and social vision of Fluxus. The majority of his scholarly research in art history, focused on the European and Siberian art of migrations, reflects his devoted interest on the intersection between Eastern and Western epistemological paradigms.

These canvases, which combine aesthetics of the ancient Far East and the Western avant garde, evoke a nostalgic exploration of figuration and abstraction. Reflecting the pantheistic nature of the Eastern mentality to view the universe and God as one and the same, each painting represents a pure moment of structural unity in their compositional relationship between fluxions, textured spaces, and bold figuration. They may regarded as the visual counterparts to Maciunas’ research essay on Eastern chirography and Western epistemological paradigms featured in the conceptual web exhibition.

The exhibition opens March 9 and continues through April 28, 2012.