Cities Deal With a Surge in Shantytowns 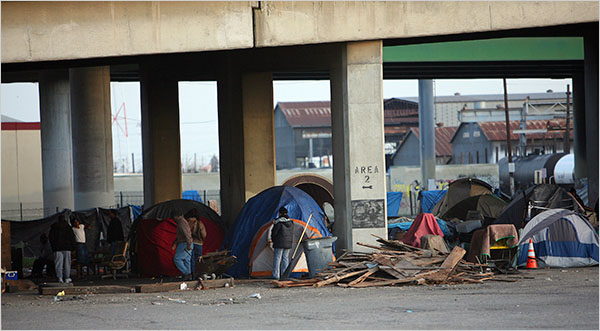 FRESNO, Calif. — As the operations manager of an outreach center for the homeless here, Paul Stack is used to seeing people down on their luck. What he had never seen before was people living in tents and lean-tos on the railroad lot across from the center.

“They just popped up about 18 months ago,” Mr. Stack said. “One day it was empty. The next day, there were people living there.”

Like a dozen or so other cities across the nation, Fresno is dealing with an unhappy déjà vu: the arrival of modern-day Hoovervilles, illegal encampments of homeless people that are reminiscent, on a far smaller scale, of Depression-era shantytowns. At his news conference on Tuesday night, President Obama was asked directly about the tent cities and responded by saying that it was “not acceptable for children and families to be without a roof over their heads in a country as wealthy as ours.”

While encampments and street living have always been a part of the landscape in big cities like Los Angeles and New York, these new tent cities have taken root — or grown from smaller enclaves of the homeless as more people lose jobs and housing — in such disparate places as Nashville, Olympia, Wash., and St. Petersburg, Fla.

In Seattle, homeless residents in the city’s 100-person encampment call it Nickelsville, an unflattering reference to the mayor, Greg Nickels. A tent city in Sacramento prompted Gov. Arnold Schwarzenegger to announce a plan Wednesday to shift the entire 125-person encampment to a nearby fairground. That came after a recent visit by “The Oprah Winfrey Show” set off such a news media stampede that some fed-up homeless people complained of overexposure and said they just wanted to be left alone.

The problem in Fresno is different in that it is both chronic and largely outside the national limelight. Homelessness here has long been fed by the ups and downs in seasonal and subsistence jobs in agriculture, but now the recession has cast a wider net and drawn in hundreds of the newly homeless — from hitchhikers to truck drivers to electricians.

“These are able-bodied folks that did day labor, at minimum wage or better, who were previously able to house themselves based on their income,” said Michael Stoops, the executive director of the National Coalition for the Homeless, an advocacy group based in Washington.

The surging number of homeless people in Fresno, a city of 500,000 people, has been a surprise. City officials say they have three major encampments near downtown and smaller settlements along two highways. All told, as many 2,000 people are homeless here, according to Gregory Barfield, the city’s homeless prevention and policy manager, who said that drug use, prostitution and violence were all too common in the encampments.

“That’s all part of that underground economy,” Mr. Barfield said. “It’s what happens when a person is trying to survive.”

He said the city planned to begin “triage” on the encampments in the next several weeks, to determine how many people needed services and permanent housing. “We’re treating it like any other disaster area,” Mr. Barfield said.

Mr. Barfield took over his newly created position in January, after the county and city adopted a 10-year plan to address homelessness. A class-action lawsuit brought on behalf of homeless people against the city and the California Department of Transportation led to a $2.35 million settlement in 2008, making money available to about 350 residents who had had their belongings discarded in sweeps by the city.

The growing encampments led the city to place portable toilets and security guards near one area known as New Jack City, named after a dark and drug-filled 1991 movie. But that just attracted more homeless people.

“It was just kind of an invitation to move in,” said Mr. Stack, the outreach center manager.

On a recent afternoon, nobody seemed thrilled to be living in New Jack City, a filthy collection of rain- and wind-battered tents in a garbage-strewn lot. Several weary-looking residents sat on decaying sofas as a pair of pit bulls chained to a fence howled.

Northwest of New Jack City sits a somewhat less grim encampment. It is sometimes called Taco Flats or Little Tijuana because of the large number of Latino residents, many of whom were drawn to Fresno on the promise of agricultural jobs, which have dried up in the face of the poor economy and a three-year drought.

Guillermo Flores, 32, said he had looked for work in the fields and in fast food, but had found nothing. For the last eight months, he has collected cans, recycling them for $5 to $10 a day, and lived in a hand-built, three-room shack, a home that he takes pride in, with a door, clean sheets on his bed and a bowl full of fresh apples in his propane-powered kitchen area.

“I just built it because I need it,” said Mr. Flores, as he cooked a dinner of chili peppers, eggs and onions over a fire. “The only problem I have is the spiders.”

Dozens of homeless men and women here have found more organized shelter at the Village of Hope, a collection of 8-by-10-foot storage sheds built by the nonprofit group Poverello House and overseen by Mr. Stack. Planted in a former junkyard behind a chain-link fence, each unit contains two cots, sleeping bags and a solar-powered light.

Doug Brown, a freelance electrical engineer, said he had discovered the Village of Hope while unemployed a few years back and had returned after losing his job in October. Mr. Stoops, of the homeless coalition, predicted that the population at such new Hoovervilles could grow as those without places to live slowly burned through their options and joined the ranks of the chronically homeless, many of whom are indigent as a result of illiteracy, alcoholism, mental illness and drug abuse.

That mix is already evident in a walk around Taco Flats, where Sean Langer, 42, who lost a trucking job in December and could pass for a soccer dad, lives in his car in front of a sturdy shanty that is home to Barbara Smith, 41, a crack addict with a wild cackle for a laugh.

“This is a one-bedroom house,” said Ms. Smith, proudly taking a visitor through her home built with scrap wood and scavenged two-by-fours. “We got a roof, and it does not leak.”

During the day, the camp can seem peaceful. American flags fly over some shanties, and neighbors greet one another. Some feed pets, while others build fires and chat.

Daniel Kent, a clean-shaven 27-year-old from Oregon, has been living in Taco Flats for three months after running out of money on a planned hitchhiking trip to Florida. He did manage to earn $35 a day holding up a going-out-of-business sign for Mervyn’s until the department store actually went of out business.

Mr. Kent planned to attend a job fair soon, but said he did not completely mind living outdoors.

“We got veterans out here; we got people with heart, proud to be who they are,” Mr. Kent said. “Regardless of living situations, it doesn’t change the heart. There’s some good people out here, really good people.”

But the danger after dark is real. Ms. Smith, who lost an eye after being shot in the face years ago, said she had seen two people killed in New Jack City, prompting her to move to Taco Flats and try to quit drugs. Her companion, Willie Mac, 53, a self-described youth minister, said he was “waiting on her to get herself right with the Lord.”

Ms. Smith said her dream was simple: “To get out of here, get off the street, have our own home.”