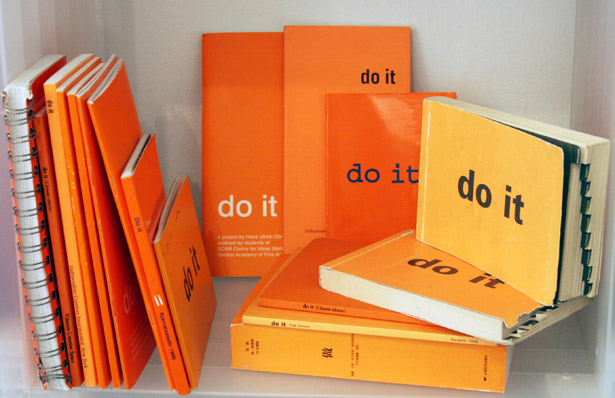 On the occasion of the 20th anniversary of do it, Hans Ulrich Obrist and Independent Curators International (ICI) are teaming up to investigate and archive the evolving exhibition, which is now the most wide-reaching in the world, and they need your help.

ICI is launching a call for documentation of do it exhibitions done spontaneously, residentially, on a small scale or a large scale—essentially any and all material from a realization of do it that may have been excluded from the official exhibition history. ICI and Obrist are aware that many independent and little-known iterations of the exhibition have taken place, and as the do-it-yourself ethos forms the foundation of the exhibition’s premise, material on these more impromptu or makeshift shows is of great import to the exhibition at large.

do it began in 1993 with a discussion in Paris between the artists Christian Boltanski and Bertrand Lavier with Obrist about whether an exhibition could be made from a series of instructions: How would an artist’s work be transformed if others made the artwork? To see what would happen, they invited 13 artists to send instructions, which were then translated into 9 different languages and circulated as a book.

Soon thereafter, exhibitions started in Europe and other artists were invited to participate in the project. In 1997, ICI collaborated with Obrist to develop a large-scale North American do it that took place in 25 cities from Boise, Idaho to Palo Alto, California, and Memphis, Tennessee to Regina, Saskatchewan.

Today this exhibition of artist instructions is the longest running ‘exhibition in progress’ ever to occur, enacted in at least 90 different places in countries such as the United States, Scotland, Portugal, Colombia, Iceland, Thailand, Denmark, France, Mexico, China, and more. No two interpretations were ever identical, making do it less concerned with copies or reproductions of artworks, than with human interpretation and experience.

Obrist and ICI are compiling a comprehensive archive of catalogues and documentation from realizations of do it, both ‘official’ and ‘unofficial,’ in order to develop an up-to-date compendium of the history and the future of do it.

Please contact Alex Kleiman, Research Assistant, at alex@curatorsintl.org or +1-212-254-8200 x126 with information on any publications, photographs, videos, and/or other textual documentation relating to any official or unofficial do it exhibitions you were involved in or organized.

ICI will continue accepting documentation on various do it iterations through April 2, 2012.

Independent Curators International (ICI) connects emerging and established curators, artists, and institutions to forge international networks and generate new forms of collaboration through the production of exhibitions, events, publications, and curatorial training. Headquartered in New York, the organization provides public access to the people and practices that are key to current developments in curating and exhibition-making, inspiring fresh ways of seeing and contextualizing contemporary art. Since it was established in 1975, ICI has worked with over 1,000 curators and 3,700 artists from 47 countries worldwide.