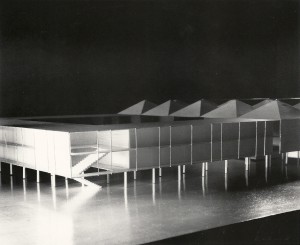 Following his studies in New York and Pittsburgh, Maciunas joined the renowned New York office of Skidmore, Owings & Merrill and took up the only position he ever held as an architect. By March 1957, he had designed a prefabricated house on stilts to the point where a patent application could be lodged (p.30). He then worked until late 1959 as an interior architect for the Olin Mathieson Chemical Group and sometimes in 1961 for Knoll International. Willingly or not, in his bread-and-butter work he soon made his mark as a designer. From 1961 owned – all the more so during his employment in the United States Army architects’ office in Wiesbaden – he wanted to concentrate on being an artist.

In his contribution to the first Fluxus anthology, which was to have been published in 1962, Maciunas took the great names of modern architecture to task. The text is entitled “The Grand Frauds of Architecture: Mies van der Rohe, Saarinen, Bunshaft, Frank Lloyd Wright.” He had evidently found the company of Gordon Bunshaft, – the lead architect-designer at Skidmore, Owings & Merrill – a sobering experience. In a tabular analysis of the Lever House in New York (designed by Bunshaft and finished in 1952), Mies van der Rohe’s Lake Shore Drive Apartments in Chicago (1951), Eero Saarinen’s MIT Auditorium in Cambridge, Massachusetts (1955), and the Guggenheim Museum in New York by Frank Lloyd Wright (1956), he suggested that in each case the client had received substandard goods from the architect. He then went on to show how each architect had wasted resources.

Rather than presenting his evidence in the form of an essay, he drew up columns labeled “Art” and “Architecture.” In the preamble to the table, he sought of an examination of said values, there was one overriding, intrinsically plausible premise: The client had chosen a famous architect in order to make the most of the funds available, but had been rewarded with “less value for more money.” Maciunas proceeded to label the architects “frauds,” “fakers,” and”swindlers” because – in his opinion – their use of materials had been dishonest and, in light of the follow-up costs, inefficient.

He specifically accused Mies of perverting the “curtains wall” idea by placing a second, non-load-bearing column in front of a load-bearing column – the client thus having to pay for a decorative feature although he had bought the products as functionalist architecture. Saarinen had wanted an extravagant cupola for his auditorium, but had to find additional funds for it because it was not self-supporting. He merely created the illusion that it was. Maciunas also accused Bunshaft of constructing a “useless” curtain wall and criticized Wright for designing eye-level window for the Guggenheim. In his view, these windows led to the need for disproportionately expensive lighting for the exhibits and simply wasted valuable wall space.

Although he had ceased to practice as an architect, Maciunas had by no means lost interest in buildings as such. This is confirmed not only by his enduring interest in facades and ornaments, but also by his later idea of Fluxhouse Cooperatives. Above all he fought to reduce resources, construction times, and the amount of material used even when the client demanded the highest quality. In his preamble to “The Grand Frauds of Architecture,” he referred specifically to “universal objectives,” explaining that “the higher the value and the more of it, the better.” In art, industry, economics, or the sciences, these “universal objectives” might be rather different – in the given context, however, it seems they could be clearly defined.

Having introduced the notions of “economy” and “efficiency” into his argument, Maciunas then transposed the money-versus-virture formula from architecture to art, According to Maciunas, the main task of the artist is to make optimum use of the time spent working, since about ninety percent of the overall cost is accounted for by the time taken to produce the art. By contrast, the architect’s fee is the exact opposite, with about ninety percent of construction costs going on building materials and workers’ wages. However, progress in both camps is possible if artists learn to become “effective doers,” and architects acquire new skills as “effective thinkers.”

From the early 1960s onward, Maciunas took a similar line with regard to almost all areas of artistic activity. With a pragmatic, moralizing attitude of “surely it’s possible…” he exhorted artists to strive for economic efficiency. Not that he was concerned with the ensuing returns and profits. The Chairman was much more interested in ever more drastic proposals for change. Four years after his text on four modern architects, he and Henry Flynt published a manifesto entitled Communists Must Give Revolutionary Leadership in Culture. Appendix 1 presents Soviet concrete slab housing as the optimum model for new residential schemes. Appendix 2 contains plans for a 175m2 prefabricated house with built-in cupboards that-like the design he had patented at Skidmore, Owings & Merrill – has no plinth (p.32). With this 1966 manifesto, Maciunas and Flynt reaffirmed the absolute primacy of using the minimal amounts of materials, number of components, and construction times to achieve maximum flexibility and durability.

For Maciunas these aims were perfectly exemplified in Richard Buckminster Fuller’s self-supporting geodetic domes that had been constructed in the United States and Canada with diameters of over a hundred meters. He envisaged a future when these structures would contain factories, department stores, aircraft hangers, and even market gardens. Furthermore, specialist workers could spend their time more efficiently there than on building sites. On the subject of mobility, in Appendix 4 he presented the Citroen 2 CV as the optimum car with the lowest consumption of natural resources. In Appendix 5 musicians were exhorted to avail themselves of the electric guitar and the organ, like the band Booker T. & the M.G.s. But no one, not even the Soviets, made any real use of these “optimum” calculations(1). 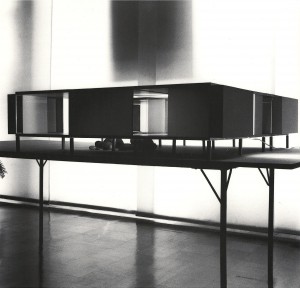 (1) In his obituary for Maciunas in the special issue of the journal VTRE in 1979, Henry Flynt alluded to the fruitlessness of his patent ideas.