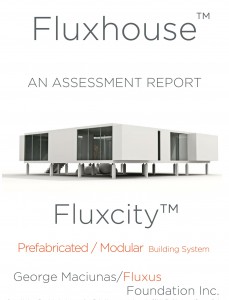 George Maciunas/Fluxus Foundation is pleased to present “An Assessment Report”, a new publication on the applications of George Maciunas’ prefabricated modular housing system known as Fluxhouse in the context of current socio-economic trends. The publication will be available to purchase in the newly renovated exhibition space at 454 West 19th St.

Trained in architecture at Cooper Union and the Carnegie Institute of Technology Pittsburgh, George Maciunas worked at several major firms including Skidmore, Owing, and Merrill, as well as the highly regarded Knoll Designers. His progressive theories were influenced by Le Corbusier’s homes, known as “machines for living”, as well as Buckminster Fuller’s geodesic dome. Maciunas’ involvement with cooperative living arrangements and affordable mass produced pre-fabricated housing are concrete examples of his practical nature.

George Maciunas is best known as the “Father of Soho” for colonizing and gentrifying this neighborhood from a post-industrial dystopia into a mecca for the arts. In 1967, he started his first artists cooperative at 80-82 Wooster Street as a joint venture between the J.M. Kaplan Fund and the National Foundation for the Arts. The Fluxhouse Cooperatives, a communal system designed to provide affordable housing, created the space in which contemporary artists and movements flourished and saved SoHo from Robert Moses’ project to construct highways through lower Manhattan in the 1960’s.

Intended as an improved design to Soviet Block Housing, Maciunas also developed a prefabricated mass building system known as Fluxhouse. Consonant with his pragmatic sensibility, this design is resistant to natural disasters such as fire, floods, earthquakes, and hurricanes, and can be adapted to suit residential, institutional, industrial, or agricultural functions. In addition, this eco-friendly and sustainable design can be multiplied to create a single family home, a mid-rise building, or a whole city (Fluxcity). “An Assessment Report” traces a history of prefabricated systems and processes, explores the aesthetic and social appeal of Fluxhouse, and proposes a sequence of steps designed to commercialize the Maciunas system for the current market.