George Maciunas (1931-1978) was the central figure in the Fluxus movement, although calling Fluxus a movement of even a group already presumes too much. A preferable term might be “practice,” “program,” or as historian Ken Friedman, who edited The Fluxus Reader (Academy/Wiley 1998), put it. “a way of doing things.” Among Maciunas’ singular achievements in the 1960s, he earned the appeliation “the Father of Soho” by organizing the Fluxhouse Cooperatives, a series of affordable spaces for srtists in what were then rundown cast-iron industrial lofts zoned strictly for manufacturing. These residences were rarely up to code, and at one of them, 80 Wooster, recalls filmmaker Jonas Mekas—Maciunas’ friend, artist collaborator, and fellow Lithuanian emigre—Maciunas wanted to build a project room. Trained as an architect at Cooper Union, Maciunas had a strong sense of structure, but he wasn’t entirely sure that a bolt he was driving into a column to hang a beam wouldn’t crack and compromise the whole building’s stability. He ordered everybody out onto the street, went back in, drilled the hole at potential hazard to his life, found that the building didn’t collapse around him, hung the beam, and announced it was safe to go back inside. (Everyone alive? Showtime!)

A few years later, cleaning the basement after Maciunas had moved out. Mekas found a tiny flask full of dust particles. Maciuas had captured the shavings from that drilling, carefully labeled them, and saved them as a Fluxus Object. That was Maciunas in a nutshell: charismatic, impulsive, improvisational, willing to run an outrageous risk for a relatively minor payoff, considerately dictatorial, but also responsibility devoted to others, highly effective at getting results, and alert to the capacity of even the most mndane object to trigger memory and hold interest.

His skepticism toword the conventional art world was the flipside of a lifelong commitment to functionally, efficiency, and egalitarianism. As disorderly as Fluxus events and personally clashes could be, Maciunas also kept rigorous, intricate charts and diagrams choronicling its works and ideas, such as a “Diagram of Historical Development of Fluxus and other 4 Dimensional, Aural, Optic, Olfactory, Epithelial & Tactile Art Forms (Incomplete),” a huge poster-format timeline of Fluxus and proto-Fluxus events from 1948 (14 years before he came up woth the name) through 1971. Fluxus, one might say, was in the details, and Maciunas was, among many other things, a detail man.

Following the broader exhibition From Fluxus to Media Art at Chelsea’s Maya Stendhal Gallery last spring. George Maciunas Prefabricated Building System presents the partial realization of one of his most practical ideas, a 1,900-square-foot modular house surrounding an off center internal courtyard. Stendhal’s architect Scott Weinkle guided the presentation, with 3-D renderings and walk-through animations by Maurice Arduz, and a handsome 1:10 scale model by Brooklyn Model Works. The exhibition also includes films and stills by Mekas in a side room, evoking the warmly wacky social atmosphere around Fluxus circles. “What interested me most,” said Weinkle from his Miami Beach office, “was how Maciunas was able to imbue in his kit of industrial parts a spatial and visual poetry, and also how he atrium functioned as a kind of spiritual center. He was extremely idealistic as well as pragmatic.”

The house is a single-story modernist box of transparent and translucent walls mounted on small pilotis, organized on a three-by-three matrix of rectangular modules. The building instructions, not much more complicated than the assembly sheets for some of Ikea’s larger furniture, require no heavy machinery or special construction skills. With nine mass-produced structural components, sliding nonstructural interior walls, and a single static element (a service cubicle containing plumbing, heating, and kitchen appliances), the design gives occupants considerable flexibility in customizing the space. This bright-white iteration of the system—congenitally colorblind, Maciunas nearly always worked in black and white—includes a serene rock garden with a single tree, though the design also allowed for other courtyard functions: children’s play spaces, barbecue grottoes, commercial or live/work uses.

The Prefab Building System first appeared in plants that Maciunas and a sometime colleague, the pugnacious philosopher/musician/all-purpose gadfly Henry Flynt, devised in 1965 for a housing system in the Soviet Union, hoping to improve on the heavy concrete residences that Soviet builders had favored since 1960. Maciunas designed, and may have helped draft, Flynt’s pamphlet, which urged a return to the revolutionary aesthetics of the 1920s and an adoption of certain technologies that could democratize cultural power, including electric guitars, Buckminster Fuller domes, and Citroen 2CV cars. The Prefab System was part of this document. The Stendhal Gallery’s public presentation nearly erases this origin (thought a press-kit essay by Julia Robinson does mention it), perhaps to jettison what today appears as off-putting ideological baggage. It’s easy to accuse Flynt and Maciunas of naivete in attaching egalitarian hopes to the post Stallinist Soviet regime, but abstracting the design idea from any utopian context seems naïve in a different way.

Maciunas and his fellow Fluxists are known more for neo-Dadaist, often anti-art perfoemances, manifestos, and tactics aimed at breaking down socially exclusive cultural practices than for their architectural ideas. But at least one major Fluxus participant and chronicler, Friedman, has argued that Maciunas’ architectural and urbanist ideas were central to his vision and deserve at least as much recognition as his role as chief impresario of Fluxus. Maciunas himself asserted in a 1978 interview with Larry Miller that functionalism is “the way the architect thinks… otherwise he’s not an architect, he’s a sculptor or stage designer.” However much hostility to high modernism appeared in his theoretical writings—he had lambasted Wright, Miles, Saarinen, and Bunshaft as “The Grand Frauds of Architecture,” betrayers of modernism’s functionalist principles, as recently as 1964—Maciunas organized space with a Corbusian spareness, rationality, and efficiency; he wrote admiringly of Le Corbusier’s understanding that “space is a movement within itself, it is never at a standstill, just as sea is never without a wave.” Fidelity to natural forces and harmonies would always command Maciunas’ loyalty as much as any form of elitism attracted his scorn, and the socially useful rationality of architects’ and engineers’ methods recurs in his writings as a preferable alternative to capital. A Art’s inutile aestheticism.

Friedman notes that “Fluxus suggests approaches that are simple rather than simplistic,” and the Prefab System falls on the right side of that distinction. It is parsimonious, not in the sense of material stinginess but in the scientific sense of Occam’s Razor, eliminating unnecessary elements to express essential forms and ideas. The model and renderings suggest a hybrid of the Johnson Glass House, the courtyard houses of Beijing’s hutongs, and the contemporary prefab designs of LOT-EK, Jennifer Siegal, or Adam Kalkin, Weinkle, working from Maciunas’ drawings, found it “inspiring to see [Maciunas] so meticulously draft the construction details using pen and ink, Zipatone, and Leroy lettering, and also his desire to leave no weatherproofing detail unsolved.” One can easily envision Maciunas’ buildings solving the housing problems of workers or refugees at any number of sites world-wide, from medium-density, urban infill zones to the Louisiana/Mississippi hurricane path, where they would provide a calm, Zen-modernist alternative to the quaintness of Katrina Cottages and a huge upgrade from the FEMA trailers.

Four decades after the Fluxists’ playful but deadly-earnest radicalism had its moment, they have attained a position few of them would have warned, enshrined in museums and curricula as another art movement alongside Dadaists, Surrealists, Situationists, Dutch Provos, Warhol Superstars, and punks. The model on view at Stendhal, however, suggests that there’s nothing nihilist, ironicized, or simulacral about Maciunas’ thinking at all: In other words, the practical challenge of his utopianism remains unanswered, no matter how hard it may be for art markets to assimilate objects built to maximize function and ignore or subvert fashion. Flynt, contributing to a Maciunas tribute volume, started bluntly, “The design is not suited to the capitalist housing market.” The long-range accuracy of that statement depends on whether any developer (profit-driven or public) can now take up the challenge that both Maciunas’ design and Stendhal’s succinctly provocative exhibition have lain down. 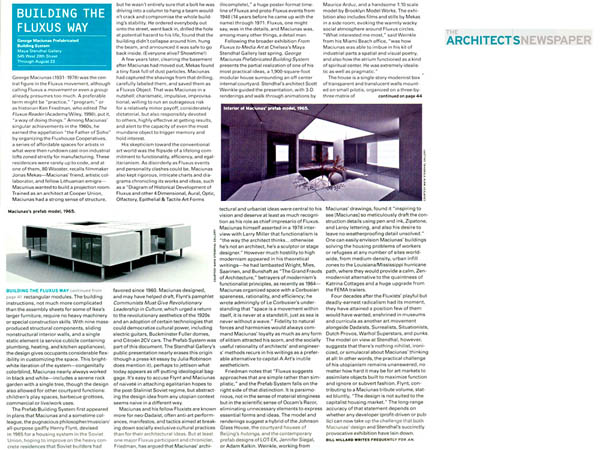