Celebrating Fluxus, a Movement That Didn’t Create by the Rules 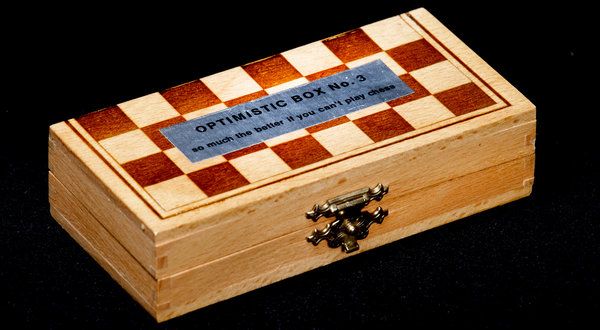 Last year was a big one for Fluxus, despite the fact that this international network of artists, composers and poetic pranksters has been defunct for several decades. Attention in art history is often bestowed posthumously, however, and because 2011 was the 50th anniversary of Fluxus’s first New York project — an exhibition in book form of performance-related materials — half a dozen shows have been mounted locally to commemorate the group’s existence. One of them is “at/around/beyond: Fluxus at Rutgers University” at the Jane Voorhees Zimmerli Art Museum in New Brunswick.

Rutgers played a special role in Fluxus. The artists Allan Kaprow, Geoffrey Hendricks and Robert Watts, described by their fellow artist Carolee Schneemann as a kind of “Fluxus-seedbed,” all taught there in the late 1950s or ’60s. According to the brochure that accompanies the exhibition, George Brecht, a chemist at Johnson & Johnson in New Brunswick, contacted Mr. Watts after seeing a faculty exhibition in 1957, and the two met for lunch every week at the local Howard Johnson’s to discuss their common interest in art and science. Mr. Brecht became a core member of Fluxus. And George Maciunas, one of the driving forces behind the group, organized Flux-mass, a mock-religious action performance at Rutgers in 1970.

Unlike other ’60s movements, however, Fluxus had a kind of patron saint: Marcel Duchamp, the French artist who was associated with Dada and gave up painting in the earlier part of the 20th century in favor of ready-made objects — then supposedly gave up art to play chess (although he didn’t, really).

The idea of art (or life) as a game in which the artist reconfigures the rules is central to Fluxus. It is best spelled out in the exhibition in chess sets that replace strategy and reason with absurdity and chance.

Robert Filliou’s little fold-up chess set from 1969 most directly invokes Duchamp: “Optimistic Box #3 — So much the better if you can’t play chess (you won’t imitate Marcel Duchamp).” Others carry out these ideas in elegant, poetic objects, like Takako Saito’s “Sound Chess,” reconstructed in 2003 from an earlier version. It is a set of cubes divided into light and dark wood, and laid out on the familiar checkerboard grid. The only way to distinguish the pieces within the cubes is to pick one up and shake it. The trick, of course, is trying to remember which rustling, tinkling or clinking sounds stand for pawns, bishops or queens. (Ms. Saito also made a set in the mid-60s called “Spice Chess,” which relied on scent rather than sound.)

One of the most amusing objects in the show was conceived by Larry Miller, a onetime student of Mr. Watts. His “Fruit and Vegetable Chess” from 1972 — that is, the idea is from 1972, even if the produce is more recent — uses limes and little ears of dried corn for the pawns, and a pineapple, coconut, pumpkin, turnip and cabbage for other pieces. The set comes with instructions, including this one: “Please play with the chess set, but refrain from eating the chess pieces.” During my visit, two women fell into confusion over what the fruits and vegetables represented, which devolved into the perfect Fluxus conversation. “How could you forget?” one of the women asked, to which the other responded, “How could you remember?”

The idea of overturning the rules — a perfect metaphor for the ’60s and early ’70s — can also be seen in objects from the 1970 “Flux-Sports” show at Douglass College, in which participants could play table tennis with paddles with fake daisies or an art magazine attached to them or one made useless by a huge hole drilled through its center. There are skis with four shoes attached, intended for four participants’ feet, and hammer throws with ropes tied to an art history textbook or to the “Fluxus Codex,” a kind of Fluxus bible published in the ’80s by Jon Hendricks.

In addition to games, Fluxus is known for using the mail for the dissemination of objects — or, sometimes, for subversion of the mail system itself. Mr. Watts’s “Stamp Machine” from 1962/1993 is accompanied by a grid of stamps titled “Affixations by Implosions, Inc.,” a 1967 piece that includes a Monty Pythonesque hodgepodge of lithographed statue heads, fake monarchs (that is, photographs of people wearing crowns) and figures dressed in early-1900s garb.

Fluxus has often been tied to Pop Art, because it was engaged with mass-produced objects and similarly attempted to offer more accessible art than “advanced” painting movements. You can see the overlap between the two movements in works like Al Hansen’s 1962 collage outlining a woman’s body and made from Hershey chocolate-bar wrappers cut into shorter words (“her,” “she,” “hers”). But Fluxus was more international and more conceptual than Pop Art, and included composers and artists who blurred the lines between visual and sound composition. (Besides Duchamp, the other patron saint of Fluxus might be the composer John Cage.)

Alison Knowles, who worked closely with Cage, is represented by her 1962 piece, described as an “event score proposition.” It consists simply of words printed on the wall: “Make a Salad.” Across from this is a piece by the world’s most famous Fluxus artist, Yoko Ono, known outside art for her marriage to John Lennon. Ms. Ono’s “Breath Piece” from 1964 is a stripped-down “proposition” with the word “Breathe” printed on the wall, and punctuated with a period. It evokes Duchamp’s claim that he had given up art to become a “respirator,” because, as he said, “each breath is a work which is inscribed nowhere.”

Fluxus could also dissolve into an existential nothingness. Ben Vautier’s “It is all Nonsense” from 1966 is a simple acrylic rendering of the words from the title inscribed on a sheet of paper in the upper gallery, and Larry Miller’s “Chewed Drawing” from 1968 is just a piece of notebook paper masticated at one end.

By the time you reach these works in the upper gallery, you are primed to see art as a process and a gesture. If a lime can be a chess piece and words printed on the wall can be a “score,” any gesture could be considered a Fluxus artwork. And yet, it would be unwise to think of Fluxus as a completely esoteric undertaking. A footnote in the brochure reminds us that 1970 was not only the year of Flux-mass, but also the year that students at Rutgers “went on strike, took over the university president’s office and rallied against the Vietnam War.” The absurdity of Dada arose during the upheavals of World War I; Fluxus took the ferment of the ’60s and translated it into a movement in which breath, chewing, scent and hearing might, in and of themselves, become focused actions, on the level of art. 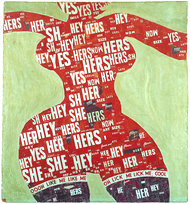